PKL Goes Back to the Future!

Today, 21st October 2015, is officially "Back to the Future Day" - the date which Marty McFly and Doc Brown famously travelled to in the film. To celebrate this momentous day, we've dug out some photos from the PKL archives showing life at PKL since 1989 when the film was set. Keen to experience some time travel ourselves, we then set to work recreating some of our favourite snaps from over the years (many featuring the original staff members!)!

On the left, David (former Financial Director), Lee (current Managing Director) and Lucy (former Event Sales) carefully study an array of drawings and brochures in around 1996/7. On the right, Lee is back in his original pose, joined by Bill (Business Development) and Krista (Event Account Manager) in the same boardroom! Here's a bit of PKL trivia for you: although Lucy left the company many years ago, she's still the voice of the PKL phone system! 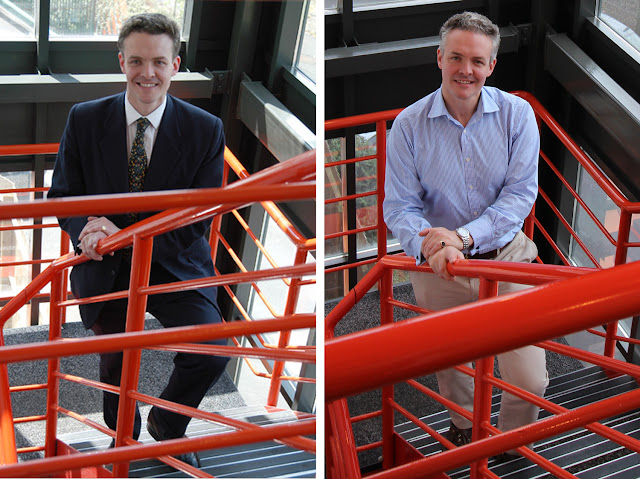 Operations Director Chris has barely changed since the original photo was taken in about 2003! Neither has the stairwell for that matter...

We appear to have experienced genuine time travel here! Design Manager Karsten is basically unchanged since 2004! 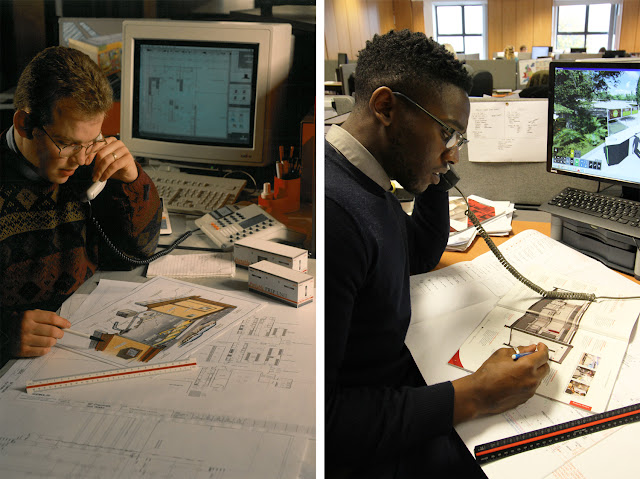 The photo on the left shows David, a CAD Technician and patterned-jumper connoisseur at PKL in the mid 1990s. On the right, Andre, the newest member of PKL's Design Team, recreates the classic pose.

The photo on the left was taken in the early 1990s of Christine, a Personal Assistant. Dan, one of our sales guys, stepped in to recreate this photo - all that's missing is a well-tended pot plant!

Email ThisBlogThis!Share to TwitterShare to FacebookShare to Pinterest
Labels: 25 years of PKL, Back to the Future Day, PKL Group